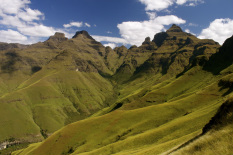 There were, and still are, many rivers, mountains, and oceans throughout Europe. During the Middle Ages, these geographical elements served various advantages and disadvantages. For example, mountains or rivers could provide natural barriers that marked a nation’s territory. Oceans and rivers were also quick methods of trade and transportation. However, mountains made attacking harder for barbaric tribes planning to invade. Rivers, on the other hand, provided enemies with easy access into other territories. This was a good thing for enemies, but not so much for the targets!