St. Benedict desired to form a very defined line between monastery life and the "outside world". In order to so this, the monasteries were made into small communities where no monks would need to leave for anything. This way, religious beliefs and faith could be increased. Eventually, these "communities" grew larger and larger, looking almost like fortified towns!

monastery - a building or buildings occupied by a community of monks living under religious vows.

monk - a member of a religious community of men living under vows or poverty, chastity, and obedience.

Daily life of a Monk 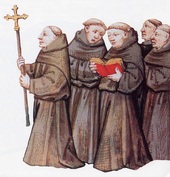 The Benedictine Monks made three vows. These were: obedience, stability, and conversion in the way of life. After making these vows to the abbot, any man could become a monk. The abbot was like the "head monk". He kept office for life and controlled the other monks. The other monks also had to be monks for the rest of their lives, after making the 3 vows.
The rules and regulations of the monasteries were very strict. Some of these rules include no receiving letters from home, no owning property, and the monks were sent to bed early. As you read above, the monasteries were designed so that no monk would need to leave. And this was also a rule. No monks were allowed to leave unless the abbot permitted it.
Spread of Christianity map