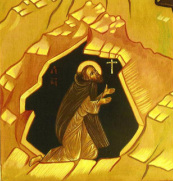 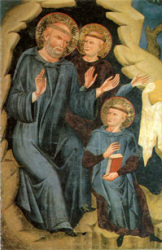 St. Benedict formed a religious group called monks. These monks were ruled by an abbot. For more information on monks and abbots click the button below.
The monks and abbots lived in monasteries where they prayed, studied religious practices, and obviously practiced their religion, Christianity.

monks - a member of a religious community of men living under vows or poverty, chastity, and obedience.

abbot - a man who is the head of a monastery of monks.

monastery - a building or buildings occupied by a community of monks living under religious vows.

Christianity - the religion based on the person and teachings of Jesus of Nazareth, or its beliefs and practices.
Monks and abbots